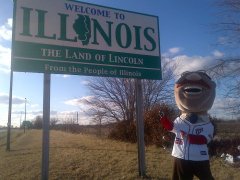 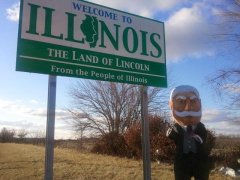 Racing president William Howard Taft gained ground on Teddy Roosevelt late Friday evening as they both crossed the Illinois line after just one day of their race to Mt. Rushmore.

The Big Chief followed Teddy in tweeting from the border just before sunset, nearly 700 miles from the day’s starting point.

In a Nationals-sponsored Twitter contest, fans have been asked to use the hashtags #VoteBill or #VoteTeddy to show support for either Taft or Roosevelt. Teddy shot out to an early lead, but voting has been light, meaning a Taft comeback isn’t out of the question.

Given that one randomly selected user of each hashtag will win a private mascot appearance with that racing president, a vote for Taft right now is
carrying pretty nice odds.