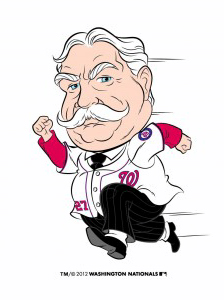 The peerless Dan Steinberg broke the story for The Washington Post late Friday, in advance of the team’s official announcement planned for today at NatsFest, the Nationals’ mid-winter fan festival at the DC Convention Center. “Bill,” as the Nats will call him, will make his official appearance at 2:15pm.

Taft, who also served as Chief Justice of the Supreme Court, has been nicknamed “Big Chief” by the Nats brass. A Twitter account appeared Friday evening at @NatsBigChief27, signaling the prominent role the team plans for him in social media. He is just the second racing president to have his own Twitter account.

Taft had been pegged as a 35-to-1 longshot on this page just this morning, but apparently Teddy Roosevelt himself made the decision to go with the notoriously obese Republican who succeeded him as president.

“Teddy has handpicked the next president for the Presidents’ Race,” Nationals COO Andy Feffer told Steinberg. “There was a great amount of banter and discussion back and forth, but Teddy won out with his recommendation.”

If Big Bill is to in fact displace Teddy as a fan favorite, it would not be the first time that Roosevelt hand-picked his successor. At the beginning of his second term, Roosevelt tapped the former judge to be his Secretary of War, then four years later campaigned aggressively for Taft and helped hand him the White House.

It wasn’t long, however, before Roosevelt concluded that Taft had abandoned his progressive ideals, and became one of President Taft’s most vocal critics. Roosevelt ultimately formed the Progressive “Bull Moose” Party to run against his former colleague.