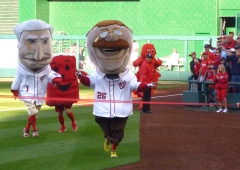 It’s been a postseason of redemption for Nationals racing president Teddy Roosevelt, who is on a sudden winning streak after losing 525 straight races.

Facing possible elimination Thursday night at Nationals Park, infielder Mark DeRosa read the team a speech by Teddy Roosevelt before the game. Then, when the presidents race began, the Nats trotted out an all star cast of Teddy’s past nemeses to help exorcise his demons.

As George, Tom, and Abe raced around the warning track towards the first base line, they were met in succession by a who’s who of bad guys.

Long-time interloper That Cat tackled George Washington.  Then a shark who attacked Teddy in August took out Thomas Jefferson.

Luc the Lobster, who has made several appearances over the years, tackled Abe Lincoln.

By that time, George Washington was back on his feet and actually passed Teddy and looked ready to steal the victory, but Mr. Kool Aid, a fan favorite who last appeared in 2010, appeared from the stands and decked the founding father.

Teddy turned around and fell backwards over the finish line, then pranced and posed around the stadium, basking in the glow of victory as the sellout crowd chanted his name.

On the national broadcast, TBS analyst Bob Brenley took Teddy to task for his celebration. “You’re pimping it a little bit in front of the other presidents,” he said. “Act like you’ve done it before.”

After 7 seasons of losing, most fans seemed willing to cut the Rough Rider some slack.

One thought on “Video: Teddy triumphs in all star villains presidents race”