The Nats brought the best record in baseball home to DC as they kicked off the season’s penultimate home stand with a doubleheader vs. the Dodgers Tuesday at Nationals Park.

Nationals mascots Teddy Roosevelt and Screech the Eagle aren’t allowed to talk on duty, but that didn’t prevent them from celebrating National 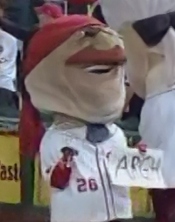 Talk Like a Pirate Day during the fourth inning presidents race.

Teddy Roosevelt came out for the nightcap race sporting a pirate’s bandana and a hook for a right hand.