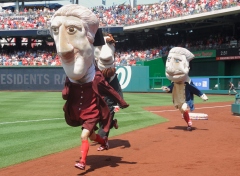 The Nationals racing presidents pushed the envelope once again as they wrapped up an Olympic-themed homestand at Nationals Park.

After taking on race walking, fencing, rhythmic gymnastics, track, swimming, and sailing, the Nats had turned to Twitter looking for suggestions for the final event.  Fan suggestions leaned toward the unlikely, such as shooting, rowing, handball, trampoline, and badminton; but nobody anticipated what happened on Sunday — the racing presidents turned equestrian with a Steeplechase that incorporated racing, hurdles, and water.

Of course, in the actual Olympics, the point is to jump over the water on horses, but on Sunday the presidents jumped into kiddie pools scattered around the warning track.

Unfortunately, Teddy Roosevelt took his time and seemed more interested in splashing around than in winning. As Jefferson raced ahead to victory, Roosevelt splashed in the pool, and failed to cross the finish line.