Today Let Teddy Win brings you a guest post by Brian Ketchum, who recently chaperoned a group of 78 U.S. history students from Hillwood Middle School in Ft. Worth TX to Washington, DC to visit Nationals Park and cheer for Teddy Roosevelt:

As Hillwood Middle School in Fort Worth, Texas got ready for our yearly 8th grade trip to Washington D.C., we asked the kids, what do you want to do when you are in D.C.? One thing that everyone wanted was to see a game at Nationals Park.

The teachers, already well aware, informed the kids of the tradition at the ballpark, the President Race, and LetTeddyWin.com; so when it was time to design t-shirts for the week, the kids overwhelming voted on custom National jerseys with Roosevelt #26 on them. 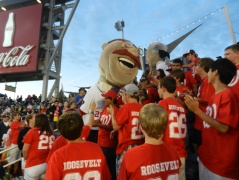 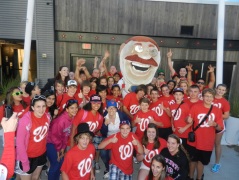 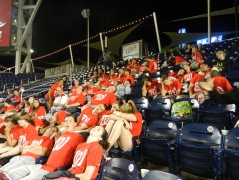 Before the game began, we made an “executive” decision to make a rare visit to Theodore Roosevelt Island to see Teddy himself, and look for guidance before we went to cheer him on. Some of the kids wondered if having so many fans there would push Teddy to victory. After each member of the group touched him for good luck, we headed to the ballpark.

We loved Nationals Park. It’s immaculately clean, from the concourse, to the seats, to even the bathrooms. The ushers were very nice and helpful for such a large group of Teddy fans. The view of the Capitol dome and Washington Monument from the Right Field Terrace are stunning.

The game was cruising along with pitchers for both teams working fast, and before you knew, the Presidents were off and running. This race was just ridiculous! The kids yelled “LET’S GO TEDDY” over and over, but they moved the finish line to the opposite side and Abe biked instead of running. Needless to say, the Teddy fans felt cheated. This is no way to treat a Bull Moose. We firmly believe that Abe should be tested for PEDs.

After the race, while some of the kids were looking for the eight pound StrasBurger, (they didn’t find it), the game got interesting.  Both managers emptied their bullpens as the game wore on. The crowd shrunk as the game entered extra innings.

We received a surprise visit from Teddy, who came and joined us in section 238. He combed his moustache, cleaned his glasses, and took photos with the group. It was pretty cool to meet the great Hero of San Juan Hill. The kids were excited.

The Teddy fans were exhausted and ready for bed, but they had decided they were staying until the last out. A few of them, (myself included) admitted they were hoping it would go to the 13th for an extra innings President’s race.

The Nationals TV and scoreboard crew must have noticed the loud group from the living Hillwood Middle school because they showed us over and over on the TV broadcast along with nearly every half inning on the HD scoreboard.

The Mets rallied from behind to take leads in the top of the eighth, 10th and 12th innings — only to have the Nationals tie the game in the bottom of the frame each time. The game was finally won on Bryce Harper’s first career walk off. History was witnessed.

Hopefully the first of many.

After years of being the NL East’s doormat, The new Nationals are 1st in War, 1st in Peace, and 1st in the National League East.

Now if only we could bust this trust and give Teddy a shot to bask in the glory. Maybe he’ll win the first playoff game. Maybe that will be this year…