It’s been nearly three years since retired racing pierogie Potato Pete leveled Teddy Roosevelt at PNC Park.  The 2009 incident that wouldn’t die was celebrated on ESPN’s Sportscenter and nominated for a “This Year in Baseball Award”. With Potato Pete officially retired, our favorite racing president never got a shot at revenge. 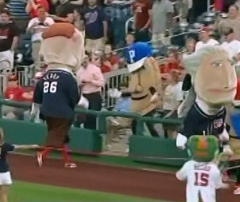 For TR, the wound obviously remains as fresh as ever, because when Potato Pete made a surprise appearance Wednesday night at Nationals Park, Teddy stopped dead in his tracks.

After a questionable tag from Abe Lincoln in center field, Teddy got a big jump on the second leg, but stopped in his tracks when Potato Pete appeared in the stands by section 134.

Teddy and Pete began sparring, and even took their scuffle into the stands as George Washington raced by for the win.

After the race, Teddy tweeted Ohhh, I see Potato Pete has come out of retirement and on MY home turf!? I haven’t forgotten what happened in 09! Tomorrow Pete, it’s ON!”

It sound like a grudge match is in the works for Thursday’s series finale. This could be fun.