If opening day at Nationals Park was any indication, it’s going to be a wild and exciting year on South Capitol Street.

A sellout crowd turned out Thursday afternoon to watch Gio Gonzalez pitch a gem in his Nationals Park debut, capped by a walk-off extra-innings Nationals victory that moved the team into sole possession of first place in the NL East. With the team having seemingly turned a corner, Teddy Roosevelt fans were hoping the Nats might use the occasion to finally Let Teddy Win. 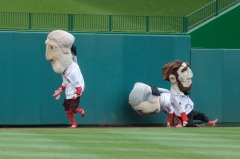 In a surprise move, the Nationals moved the presidents race to the left field/third base line and out of reach of the Nats bullpen, protecting the race against a repeat of last season’s attempted interference by players on Teddy’s behalf.

Roosevelt made a third inning appearance on the Nationals Park scoreboard with professional wrestler CM Punk. The clip showed the two sneaking up on Teddy’s napping opponents behind the centerfield wall, tying their shoelaces together, and then sneaking off (video below).

When the race began in the middle of the fourth inning, Teddy’s rivals George Washington, Thomas Jefferson, and Abraham Lincoln immediately tripped on their shoelaces and tumbled onto the warning track.

Roosevelt took off, hopping and skipping around the left field corner on his way to the finish line.

But the quick-thinking Jefferson was on his tail, running barefoot and carrying the shoes he slipped off as soon as he had discovered the scheme.

TJ caught Teddy as they approached the finish line, holding out his sneakers to break the tape and steal the first presidents race of 2012.

As for their move of the presidents race to the opposite side of the stadium, the Nats have so far been mum; but after the game, outspoken Teddy supporter Jayson Werth expressed his displeasure once again with the conspiracy.

An informal survey of fans in the stands suggested that season ticket holders are not happy with the move either.

The presidents have built a loyal cheering section along the right field and first base lines, home to the Nats’ largest season ticket base. All eyes will be on the field for the fourth inning Friday to find out if order will be restored.

One thought on “Video: Jefferson slips Teddy and CM Punk’s trap as the presidents race is moved for 2012”