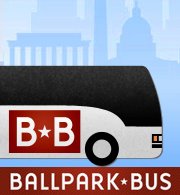 Brian Bowman was a Nationals fan with a problem.

A Nats fan “since the beginning,” Bowman, 33, never bought season tickets because his family lives in Ashburn, Virginia, and could only take so many taxing rush hour drives through suburban traffic to reach Nationals Park. “I’m not near the Metro,” Bowman says, “and the drive can be hard.”

This season, he’s teaming with two friends to do something about it.

“We want to turn something mundane like getting to the game into something relaxing and fun,” said Bowman. “The Ballpark Bus adds to the total fan experience.” 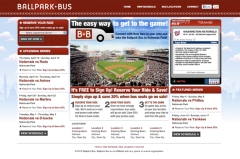 The service will start taking reservations at BallparkBus.com in March, well in advance of the Nationals April 12 home opener. Until then, the website points to their new Facebook page, where they are asking for feedback to determine which locations have the most demand.

The service will rely on the web and social networks to schedule fan buses based on need. “It’s a new concept of mass transit on demand,” says Bowman.

Fans can request a free reservation to any game from the participating restaurant that’s closest to them. Once a request has been made, “social tools” help fans recruit additional passengers from their own social networks and on the website. When enough reservations are made, the location is officially added to the ticketing schedule, with those early reservations receiving a discounted seat price.

Ballpark Bus will drop fans off just outside the first base entrance to Nationals Park at Potomac Avenue on the Anacostia River, which should add to the appeal compared to remote parking or Metro.

In addition to the Facebook page, Ballpark bus has posted a video showing how it works:

Bowman, who is an Art Director at a local agency, plans to add some “fun promotions” for bus passengers, but isn’t pitching Ballpark Bus as a party bus. The team is still working out whether alcohol will be allowed.

Pricing has not been published, but “will be competitive with other forms of transport to the park such as Metro and parking,” said Bowman. “A top priority for us is to keep the price down so its family friendly.”

Bowman is hoping the service can help grow the ranks of Nationals fans from locations as disparate as Loudon, Fairfax, Montgomery, Prince Georges, Prince William and Anne Arundel counties, adding “We want to get information from the riders and build it around what they want.”

As of this morning, the site’s Facebook survey showed an early preference for locations along I-66 (Tysons, Fairfax, Centerville, Manassas), followed by the Dulles Toll Road (Reston, Herndon, Sterling, Ashburn), I-270 (Rockville, Gaithersburg, Germantown), and I-95 South (Springfield, Lorton, Woodbridge).