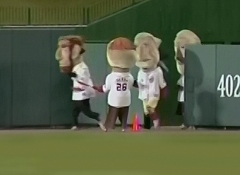 Teddy Roosevelt, meanwhile, is simply desperate to notch a single win, and on a brisk Friday night at Nationals Park, he pulled a trick out his hat that nearly worked.

Teddy jumped in front of the other presidents at the center field gate, and with the help of an orange cone and barricade stick, he redirected the presidents towards left field.

All followed suit without hesitation, and Teddy dashed toward the finish line.

Abe wasn’t fooled for long, though, and turned around quickly to begin his pursuit. Much to the crowd’s dismay, the Great Emancipator caught Roosevelt at the finish line to notch his 30th victory of the season and guarantee at least a share of his fourth consecutive presidents race season title.

The victory dropped Lincoln’s magic number to 1 for the outright season title. Thomas Jefferson, who was featured in today’s Social Studies DC Celebrities Without Eyebrows blog post, needs to reel off five straight wins for a chance at the tie.