It’s that time of the season, when, with only a handful of home games left, the race to the finish makes the competition desperate. 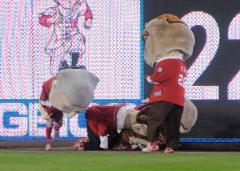 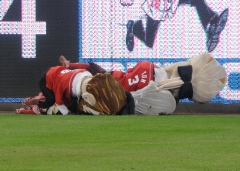 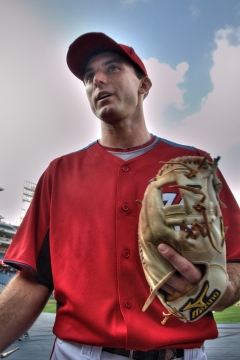 Such was the case Saturday night at Nationals Park, when Teddy Roosevelt, still searching for win #1 in the Nationals’ presidents race, turned on the competition, trapping them in a pack against the outfield scoreboard and slamming them to the ground.

Unfortunately for Teddy, he didn’t knock them out.

After Washington, Jefferson, and Lincoln hit the ground, they jumped back to their feet and chased down the Rough Rider, piling on en mass.

Teddy never recovered, and Thomas Jefferson took the tape to keep his hopes alive in the 2011 presidents race standings.

The National’s continued their tradition of embracing social media by hosting a group of bloggers on Saturday, as we were given the opportunity to meet September call-ups Brad Peacock, Chris Marrero, and Stephen Lombardozzi, as well as skipper Davey Johnson and members of the Nationals staff including Director of Minor League Operations Mark Scialabba and Sr. Director of Community Relations Israel Negron, who shared his enthusiasm over the team’s newly-announced sponsorship of the Washington Nationals Wounded Warrior Softball Team.

For the record, Lombardozzi joins the ranks of players who’ve thrown their support behind the Let Teddy Win movement, noting that he’s come to Nationals Park in previous seasons to sit in the stands. “I hope he wins,” Lombardozzi said. “I’m hoping he gets
a ‘W’ before the end of the season.”