26,759 fans came to Nationals Park Tuesday to welcome the home team back to DC, and the evening didn’t disappoint as the Nationals followed their winningest road trip in years with a thrilling come-from-behind victory over the St. Louis Cardinals. 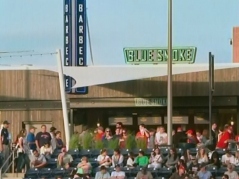 Fans had been drawn in by the return of Ryan Zimmerman, a $2 ticket promotion, great weather, a big draw opponent, and the long-awaited debut of the revamped Miller Lite Scoreboard Walk behind the right field bleachers.

The myriad updates to the popular Scoreboard Walk include a 4,000 square foot lounge area with artificial turf, chairs, sofas, trees, plants, and a large number of stylish new “shade sails.”

The sails stretch over the lounge area as well as the queue lines for each of several new dining options, providing sun protection when waiting in line on hot summer days. These new lounge and queue areas are all within view of the big new TV screen that premiered this season behind the outfield scoreboard.

As nice as the improved amenities are, the buzz on Twitter and in the Park tonight focused on the four new restaurant options that line the Scoreboard Walk. After tonight’s debut and a sampling of all the menus, it’s safe to say that Nationals Park food options rank among the best in the majors, albeit at some fairly steep prices.

No stand was more anticipated than Shake Shack. The most famous of the four new options from Union Square Restaurant Group, Shake Shack features hot dogs, fries, shakes, and natural Black Angus burgers. The burgers live up to their reputation, with a nice coarse grind that highlights the flavor of the meat more than the predecessor at the same location — DC’s Five Guys Burgers and Fries. A single is $5.75 and a double runs $8.75.

The sleeper and my personal favorite of all the new food options may be the ‘Shroom Burger, a portobello mushroom split and filled with muenster cheese, deep fried, and served on a burger bun. Truly decadent and delicious for $7.75.

For the first time since Giffords Ice Cream left Nationals Park this spring, fans can get once again get a milkshake in the stands at Nationals Park. Shake Shack’s namesake treats are made from frozen custard and come in four flavors.

At $5.75, the shakes are indeed quite good, but the buzz was around the Concrete, a dense cup of custard blended with chocolate truffle cookie dough, peanuts, and caramel. A straw will do you no good with this concoction. Price: $6.75 plus a week at the gym.

Shake Shack has fries on the menu, but spud connoisseurs will likely shuffle down a few feet to Box Frites, where fresh cut fries can be ordered by the box with your choice of toppings or dipping sauces.

The movie theater-inspired pricing gets you a reasonable-sized portion for $7.25, or a family-sized box for $8.00. You only get to choose one of the five dipping sauces (additional sauces are a whopping $2.00 each). Blue Cheese was the surprise runaway pick among our group of tasters. Chipotle ketchup is a fine second choice. Rosemary Ranch, which sounded promising, tasted like liquid pine tree.

But for the ultimate in decadent fries, the consensus pick is the Garlic-Parmesan Frites, which are light on the garlic but heavy on the parmesan, and more than suitable for sharing at $9.75.

Options include medium rare skirt steak, carnitas, or chicken “mole pipian,” a braised green concoction. The combo platter has all three and is a lot of fresh variety for $10.25.

El Verano Taquería also offers “Elote,” or Mexican grilled corn. This classic street food is a steamed ear of corn dipped in a lime-spiked mayonnaise sauce, rolled in crumbly cotija cheese, and dusted with cayenne pepper for $4.75. If you like your food spicy, the Elote is your best bet at the ball park. Consider yourself warned.

The new restaurants facing the Miller Light Scoreboard Walk feature distinctively designed facades, and none stands out more than the new Blue Smoke Barbeque, with an attractive weathered wood veneer that’s visible over the right field stands from about half of the ball park. Nice touch.

Nationals Park needed a good pulled pork sandwich to replace the departed Teddy’s Barbeque, and Blue Smoke delivers with a flavorful if slightly dry version for $8.75. Make sure to get extra sauce. There is no pulled chicken option, but you can get wings — one of the few dishes I did not manage to try.

It will be interesting to see if the Barbecued Beef Bologna sandwich takes off in DC. This southern staple features pickles and raw onions atop a single thick slice of bologna that’s been grilled and topped with barbeque sauce for $7.75.

Blue Smoke’s signature item is Kansas City Spare Ribs, which were meaty and nicely carmelized. They are a fine choice, but with three modest ribs running $10.25, and relatively light on smoke flavor, it left me longing for the Rough Rider at the dear, departed Teddy’s Barbeque.

The surprise treat of the night? Blue Smoke’s Salty Peanut-Jalapeño Chocolate Bar. It isn’t very spicy, but the complex dark chocolate and salted peanut flavors are more than satisfying, and it’s certainly the only $4.75 desert
at Nationals Park that’s suitable for sharing.

Nationals’ COO Andy Feffer took a lot of heat today for appearing to imply that the new Scoreboard Walk was more important than the game.

I find it hard to believe that any journalist actually believes that. Others have more legitimately complained that the new restaurants are not DC-centric. While I agree with the latter criticism, I can’t deny that the fan experience has been improved.

What do you think?