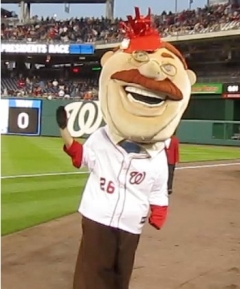 On the day of the royal wedding in England, Teddy Roosevelt paid tribute to Prince William and his new bride Kate Middleton by donning one of her favorite hats and waving stiff-armed to the crowd throughout the entire presidents race Friday night at Nationals Park.

With Jason Marquis and the Washington Nationals efficiently shutting out the world champion San Francisco Giants in the 4th inning, Teddy emerged for the presidents race wearing a stunning red hat that bore a striking resemblance to one last seen a few thousand miles away at Windsor Castle.

Teddy took a commanding lead as the crowd of 21,399 cheered him on, but the waving to the crowd slowed him down, and Abe Lincoln raced by to take the lead in the season standings.