The final homestand of the season at Nationals Park has been filled with surprises for loyal Washington Nationals fans, with myriad promotions and giveaways as part of the team’s fan appreciation month.

But those fans lamenting another goose egg of a season by a certain racing president were merely teased by the prospect of getting the ultimate gift — a Teddy Roosevelt victory. 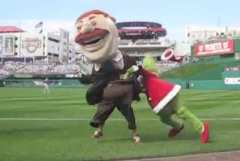 On Sunday at Nationals Park, that gift was dangled in front of them as it appeared outgoing team president Stan Kasten was finally going to let Teddy win. Roosevelt pulled away from the pack and appeared un-catchable heading into the home stretch.

Perhaps it was Kasten who was waiting in ambush, wearing a Grinch costume.

The Grinch flew onto the field from the first base stands, plowing into Teddy, knocking his glasses off and ensuring that the losing streak would remain intact.