In June, the Arizona Diamondbacks announced plans to introduce a new attraction to home games at Phoenix’s Chase Field. At the end of the 5th inning, four 10-foot tall foam-headed “legends” would race around the ball park in uniform.

In July, just before the All Star break,
the characters were revealed.

Given the short history of the team, they all hail from the D-Backs’ lone World Series championship roster from 2001.

Arizona’s legends (Luis Gonzalez, Matt Williams, Mark Grace, and Randy Johnson) are now the MLB’s second race (after the Nationals’ own racing presidents) to be based on real people.

Having been away traveling recently, I was planning to write about the new Legends Race during the Nats next road trip, but the Nationals forced the issue with their two August series vs. Arizona.

Last week, the racing presidents — at least the Diamondbacks facsimiles of them — made an appearance against the Legends at Chase Field in Arizona, and Diamondbacks play-by-play announcer Daron Sutton held up a cardboard cut-out of Teddy’s face with a sign that said, “Even I could beat Mark Grace”. 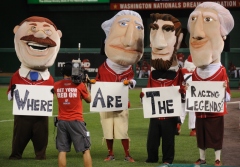 This week the Diamondbacks arrived
at Nationals Park but the racing legends stayed at home;
so on Saturday night (after a botched attempt on Friday the 13th), the presidents held up signs asking “Where Are The Racing Legends?”

Perhaps the signs should have said “We are the Racing Legends.”

With the huge popularity of our own Rushmores, it was inevitable that another team would attempt to duplicate the formula, and it appears that the Diamondbacks have gone to school on George, Tom, Abe, and especially Teddy.

Sure enough, with just a month of races under their belt, poor Mark Grace, who is currently the D-Backs color analyst for the FOX Sports Arizona baseball broadcasts, seems to be following the path of Teddy Roosevelt.

And Gracie isn’t just 0-for-24. In the first month, he’s been distracted by Silly String, held up by Darth Vader, blocked by Kung Fu Panda, and generally bullied around by the competition. 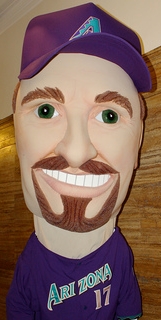 If imitation is the sincerest form of flattery, then the icing on the cake was the near-instant appearance of a blog at LetGraceWin.com.

Remarkably, the website made its debut on the same day that the first race was run, when Mark Grace was still one of three winless legends.

How did the site’s creator, Jeff Summers, know that Grace was destined to play the role of lovable loser?

Summers, a technology executive, web designer, and longtime Diamondbacks blogger, says he didn’t know. He says he became a fan of the Let Teddy Win blog when his daughter discovered it, and has become a student of Teddy’s travails. “I religiously look to it to see if today is finally the day Teddy wins,” he said.

“During the first race, Los Angeles Dodger outfielder Manny Ramirez disrupted the race throwing a towel at Grace causing a distraction costing him a win,” said Summers. “The LetGraceWin site started out just describing ‘Towel-gate.’ Each night something seemed to happen causing yet another loss.”

“I seldom if ever miss a home game so the fans knew I would know who won the race,” Summers added. “It wasn’t just who won, they also wanted to know how they won.”

A longtime student of the game, Summers attributes Grace’s misfortune to the “Cubs curse,” since Grace spent most of his career with the famously cursed Chicago franchise.

“I keep thinking he can’t go winless forever, can he?” Summers asked. “But after seeing the challenges of Teddy Roosevelt I’m more than a little frightened at what I have ahead of me.”