The Washington Nationals returned to town Friday night for a short homestand of interleague play against the Chicago White Sox and Kansas City Royals, sandwiched at either end with starts by rookie pitcher Stephen Strasburg. 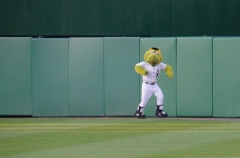 President Barack Obama joined the sellout crowd on Friday to see his beloved White Sox take on the Nationals new main attraction, and unlike his previous visit to Nationals Park, he stayed until the 9th inning, and got to witness his first Nationals presidents race.

Chicago White Sox mascot Southpaw has joined the team in DC for the weekend series, and surprised the crowd by emerging alone out of the gate for the beginning of the 4th-inning presidents race.

Just as the crowd was wondering where the presidents were, they emerged in centerfield aboard Segway personal transporters, with Thomas Jefferson at the front of the pack, and

As they passed Southpaw and approached the finish line, Jefferson appeared to lose control, and Abe Lincoln passed him to claim the victory. As he broke the tape, Illinois’ favorite son pointed up to Obama’s box along the third base line.

The racing presidents were sporting brand new red running shoes to kick off the homestand, but as it turned out, they had no need for them at all.