The Washington Nationals announced this evening that 2009 #1 draft pick Stephen Strasburg will make his highly-anticipated major league debut on June 8th at Nationals Park. The team had just released a coupon code “for Teddy’s fans” to use during that week’s series vs. the Pittsburgh Pirates.

This evening, some tickets are still available at half price in the outfield corners ($18) and outfield mezzanine ($15). Order at Nationals.com using Coupon Code “TEDDY”. 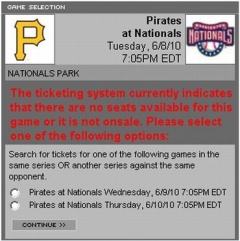 Congrats to those who got in.