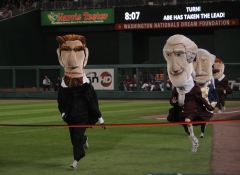 What do George Washington, Thomas Jefferson, and the Washington Nationals have in common? All were mathematically eliminated from any shot at a championship during the homestand that ended Thursday night at Nationals Park.

In a night filled with heroics on the field, Teddy Roosevelt looked uninspired. With Teddy lagging far behind in the 4th-inning presidents race, Abe Lincoln and Thomas Jefferson battled down the stretch once again, but this time it was Abe who prevailed.

Abe did a little dance and Jefferson bowed in reverence. For the second consecutive season, the Great Emancipator has locked up the presidents race title with several weeks still remaining. With his second crown, Abe will become the first 2-time presidents race season champion.