Nationals Park in-game host Clint Khoury has drawn more than occasional scorn from those purists who think the stadium hype during games distracts from the baseball at-hand. If you fall into that category, then it appears you are due either for some relief, or for double the pain, depending on your perspective.

Fans at Saturday’s Washington Nationals exhibition game vs. the Baltimore Orioles were asked throughout the night to vote via text message for the new Nationals “co-host,” with profiles of the three contestants — all women and all beauty pageant veterans — repeatedly shown on the giant HD scoreboard (photo courtesy of fellow Nats blogger Miss Chatter).

Now the Nationals have opened the voting to the general public, with votes being accepted online now through Tuesday, April 14, at 3:00pm. 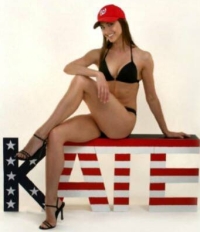 Kate Michael could have the inside track on local votes, as she has been an emerging personality in DC media for several years, and knows a few things about promoting herself on the internet. The former Senate staffer and Miss District of Columbia threw out the first pitch at a 2007 Nats game (alas, quite weakly), and represented DC in the Miss America 2007 pageant. She boasts a personal web site, a separate blog called K Street Kate, and over 700 followers on Twitter. Her enthusiasm for new media could barely be contained on a recent episode of internet talk show The District Dish: 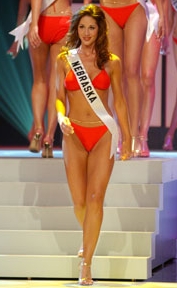 Guerin Austin is a former Miss Nebraska USA (2004), and for what it’s worth appears to have become blonde only recently.

The self-proclaimed “military brat” claims to have moved over 20 times, and is a former competitive figure skater with a degree in broadcast journalism and experience as a TV journalist and host.

What Austin lacks in DC connections she appears to make up for in “emcee” experience on a variety of television shows. Her demo reel gives a pretty good sense of what she’d be like as Nationals Park co-host: 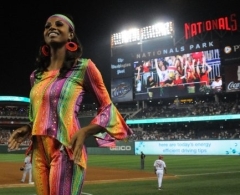 Yolanda Makle is the only one of the three contestants who has experience with the Nationals, having spent last season as a member of the Nat Pack while juggling a full-time job as a telecommunications engineer (I caught this photo of Makle during the 7th inning stretch at last season’s Nationals Park 70s Night).

The striking DC mother of two is another pageant circuit veteran, having represented Puerto Rico in the 2006 Miss United States pageant and currently holding the title Ms. Belleza Latina 2009. She is an active volunteer in the community, has a blog and boasts just a handful of followers on Twitter.

Makle’s community service, DC roots, love of sports, and experience on The Nat Pack might otherwise make her a favorite in my book, but I don’t think I could cast my vote for somebody who openly calls Abe Lincoln her favorite racing president. Ouch.

Online voting ends Tuesday, April 14, at 3:00pm, with the winner to be announced at the Nationals game vs. the Marlins on Friday, April 17th.