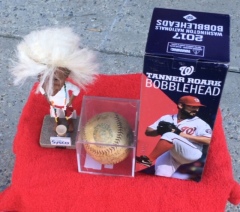 After Monday’s come-from-behind victory by the Chicago Cubs over the Washington Nationals in the National League Division Series playoffs, fans gathered outside Nationals Park in Washington at noon Tuesday to try to do their part to exorcise the team’s playoff demons.

Nationals fan “Rubber Chicken Man” Hugh Kaufman led the ancient kaporos ritual as he has “dozens of times” since the team came to Washington in 2005.

“We’ve been doing this since 2005 when our backs are to the wall,” Kaufman declared to more than a dozen fans and Nationals employees gathered in front of the stadium. saying that the Nats “have always won at least one game after we do a chicken sacrifice.”

Kaufman brought an autographed baseball from the 1924 Washington Senators (the last DC team to have won a World Series), a Jobu doll “to help the bats get rid of their fear and wake up,” and a Tanner Roark bobblehead, as Roark is scheduled to pitch game four.

Kaufman then thanked the crowd. and swung the rubber chicken above his head.  “Take all the bad juju from the Nats,” Kaufman said. “Putting it in the Chicken.”

Kaufman then did the deed, those assembled wished the team good luck, and dispersed for lunch.