The Washington Nationals racing presidents paid tribute to Monday’s 100th running of the Indianapolis 500 by sporting helmets and steering wheels, and running an extra qualifying race in the first inning Sunday at Nationals Park. 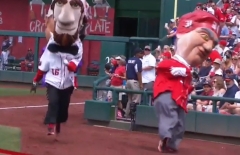 The first inning race, which saw Lincoln, Jefferson, Taft, and Hoover cross the finish line first, marked the only time the Nationals have ever run an extra presidents race before the 13th inning.

George Washington and Teddy Roosevelt failed to make the cut, and so they sat on the sidelines as the final race began in the usual fourth inning slot.

“Start your engines!” called Nationals PA Announcer Jerome Hruska as the four qualifying presidents lined up for the finale. “3-2-1… They’re off!”

Herbert Hoover got a strong start in the finale and appeared headed to victory, but the 31st president “spun out” in the home stretch, leaving an opening for Abe Lincoln to take the checkered flag. Lincoln received a trophy — rather than the usual belt — to mark the occasion.