Among the many firsts in a night of firsts Saturday at Nationals Park, The Nats racing presidents held their first-ever postseason presidents race doubleheader, running a second race as NLDS Game 2 dragged into the night. 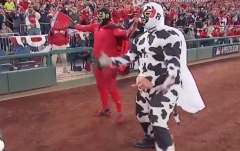 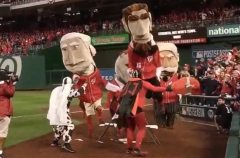 In the fourth inning, Teddy entered the race late, coming out of the bullpen to trail the pack as they approached the home stretch.

But the presidents all stopped short, because waiting at the finish line was one of the team’s oddest “guest” characters of the season, Crab Nachos Libre.

Making his third appearance of the season, Crab Nachos Libre was joined by a new character, “Beef Nachos Libre,” and together they posed, broke blocks of wood over a pair of folding chairs, and generally blocked the finish line.

That’s when Teddy Roosevelt pulled out a pair of nunchucks. With the Nationals Park crowd chanting his name, the Rough Rider dazzled his nemeses with a display of nunchuck skills, then George Washington and Abe Lincoln launched over the chairs to take down the dos hermanos. Teddy raced ahead for the victory.

And here’s our finish line video, in which a fan can be heard repeatedly saying “Oh my god. That should be illegal!”

With the score tied 1-1 in the 13th inning, the presidents appeared again to run their first ever extra-innings postseason race. Teddy used the extra TV time to stop the proceedings again, this time grabbing a “Let’s Go Nats!” sign and leading the crowd in cheers. Teddy took the victory, marking the third time this season that Teddy has won in extra innings.

The team sported an 18-6 regular season record during Teddy’s other victories this season, but when Teddy wins in extra innings, the Nats have been a disappointing 0-3.