Pittsburgh’s racing pierogies and Washington’s racing presidents have a history of bad blood, including most famously a vicious hit on Teddy Roosevelt by the retired Potato Pete at PNC Park, and one of only two instances in history when the presidents race was sabotaged by a non-president. 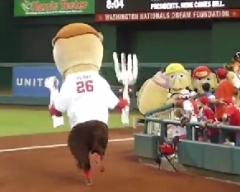 On Monday night the pierogies returned to Nationals Park and joined the fourth inning presidents race, jumping out ahead of the pack, chased by George, Tom, Abe, and Bill.

But Teddy Roosevelt was waiting for them in foul territory, yielding a giant fork and knife. Teddy chased the pierogies back into their pursuers, and as Jalapeno Hannah tried fending them off with her purse, Lincoln raced past for the victory.

On Tuesday night, the pierogies sought their revenge, with Oliver Onion waiting in ambush as Teddy raced toward the finish. Oliver jumped off a table, with Sauerkraut Sal right behind, taking Teddy down as Abe once again raced by.

Oliver’s leap captured in slo-mo below.