A fog-filled “Teddy in 2012” celebration continued Tuesday night at Nationals Park, and with the division championship locked up, the only question left in many minds was when Teddy Roosevelt would win his first race. 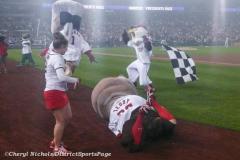 After bursting through the center field gate in the middle of the fourth inning, the Rough Rider promptly turned to lock the gate behind him. The Teddy-crazed crowd could barely make out the tops of Abe Lincoln and Thomas Jefferson through the fog, trapped on the other side of the wall.

With his rivals struggling to get through the gate, Teddy took off unopposed. The cheers grew as Teddy turned into the home stretch, but George Washington appeared through the tunnel on the first base line and leapt over the fence, landing in front of Roosevelt.

After gaining his balance, the Founding Father took off for the finish line. Teddy took a flying leap at victory, but fell short as Washington stole the penultimate race. His fourth straight win moved GW into first with one game remaining.

Wednesday’s Fan Appreciation Day will be Teddy’s last chance to pay off on the Nationals’ “Teddy in 2012” promotion. Readers looking for a Teddy victory this year believe Wednesday is the day. Whatever happens, it’s sure to be a raucous finale on South Capitol Street.

One thought on “Video: George Washington out-cheats Teddy at the wire”