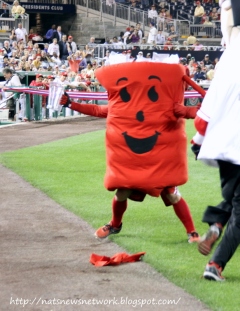 Teddy Roosevelt had once again led from the start, but as the bull moose headed down the first base line, Mr. Kool-Aid appeared from the stands and chased him to the ground, letting Thomas Jefferson run by for the victory.

With just one race left in the 2010 season, Abraham Lincoln and George Washington remain tied for first place in the standings, and Jefferson’s winning streak pulled him just one victory behind the lead.