The race began just moments after Nats centerfielder Nyjer Morgan singlehandedly allowed an inside-the-park home run by throwing a fit instead of chasing after a ball he should have caught to end the Orioles 4th inning. 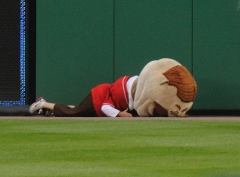 One pitch and one out later, the crowd of 30,000+ was still on its feet and buzzing about the oddity they had witnessed as the presidents race began.

Teddy Roosevelt took an early lead, but Abraham Lincoln, upset about falling to 3rd place in the presidents race standings, took a cue from Nyjer Morgan and threw a little fit of his own.

Chasing Teddy from behind, Abe dropped him to the ground, then turned to go after the other presidents.

After slamming Tom into the stands, he pranced across the finish line and climbed into the crowd to celebrate.

For the first time since Nationals Park opened, the Orioles mascot “The Bird” failed to make an appearance for the interleague race.

His Nationals counterpart Screech, who allegedly judges the presidents race, was a no show himself, failing once again to disqualify “Honest” Abe despite blatant cheating.